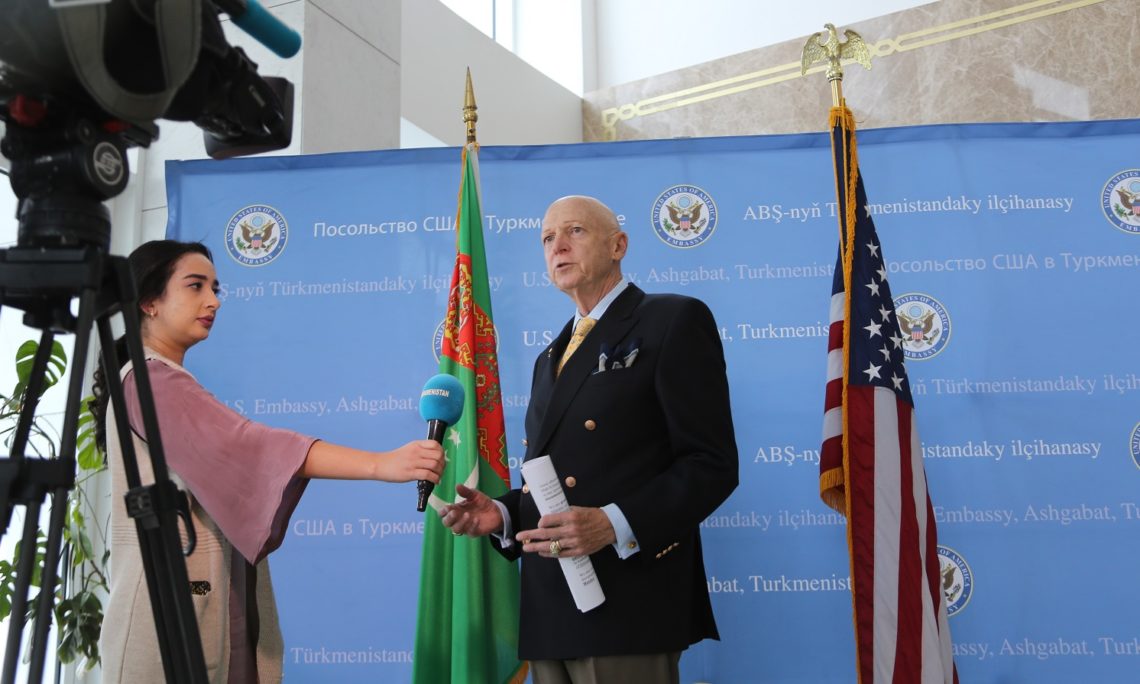 The U.S. Embassy in Ashgabat held its annual screenings of independent documentary films on Saturday, October 26, and Sunday, October 27, at the Ashgabat Cinema, featuring three critically-acclaimed movies, and followed by a Q&A with American film experts.

As Ambassador Klimow stated at the event, “Documentaries are not as well-known as fiction films. But by showing them, the U.S. embassy hopes to broaden appreciation of this type of non-fiction storytelling and to give a taste of the possibilities that it offers. Documentaries seek to inform, to persuade, to educate, and to encourage action.”

American filmmakers Cole Sax and Phil Hessler visited Turkmenistan as part of the American Film Showcase program. During their stay, they collaborated with the Ministry of Sports and Youth Policy and students and faculty of the Institute of Culture to create a documentary video about the Ashgabat Olympic Complex. The two film experts also held screenings of their own documentary short films and conducted workshops and meetings with the Institute of Culture, the Turkmen Film Association, the State Committee on Television, Radio Broadcasting, and Cinematography, and independent filmmakers.

American Film Showcase is a partnership between the U.S. Department of State and the University of Southern California’s School of Cinematic Arts. The program sends American filmmakers and film experts overseas to present independent documentaries, feature films, and animated shorts.

Cole Sax is an award-winning director & producer. His work has taken him all over the world, telling stories from the foothills of the Himalayas to the rice fields of the Philippines, creating branded content for companies including Snapchat, NBC, The International Olympic Channel, Bridgestone, and more. In 2018, Cole spent eight months producing the award-winning show Far from Home. A documentary series following six extraordinary stories of Olympic hopes, it gave the athletes the opportunity to share their story with the world, and with International Olympic Committee president Thomas Bach. His focus on impactful storytelling has helped further the development of India’s first winter Olympic training facility, has generated millions of views online and has won him numerous awards.

Phil Hessler developed a passion for the creative arts at a young age. He began making home movies as a young boy on Cape Cod where he developed an innate passion for action sports. Fast forward 10 years and Phil has an immense amount experience as both a content creator and competitive snowboarder. His passion has taken him around the world and back and he has worked for the leaders in action sports photography such as Brain Farm Digital Cinema in Jackson, WY. He has shot and edited commercial pieces for Oliberte and National Geographic, and is also a published photographer and writer. As the co-director of the feature documentary, Far from Home, part of Phil’s responsibility was raising the funds to develop, shoot, and edit the film. He partnered with the non-profit, The FuturePositiv Project and now sits on the board as their youngest member. He also negotiated sponsorships and strategic advertisement spots for the film to raise money. He is currently in his senior year at Westminster College in Salt Lake City and is a sponsored snowboarder.

For more information about this program, please contact the Public Affairs Section of the U.S. Embassy in Ashgabat at 47-35-06 (1) or e-mail USEmbassy-Ashgabat-PAS@state.gov.