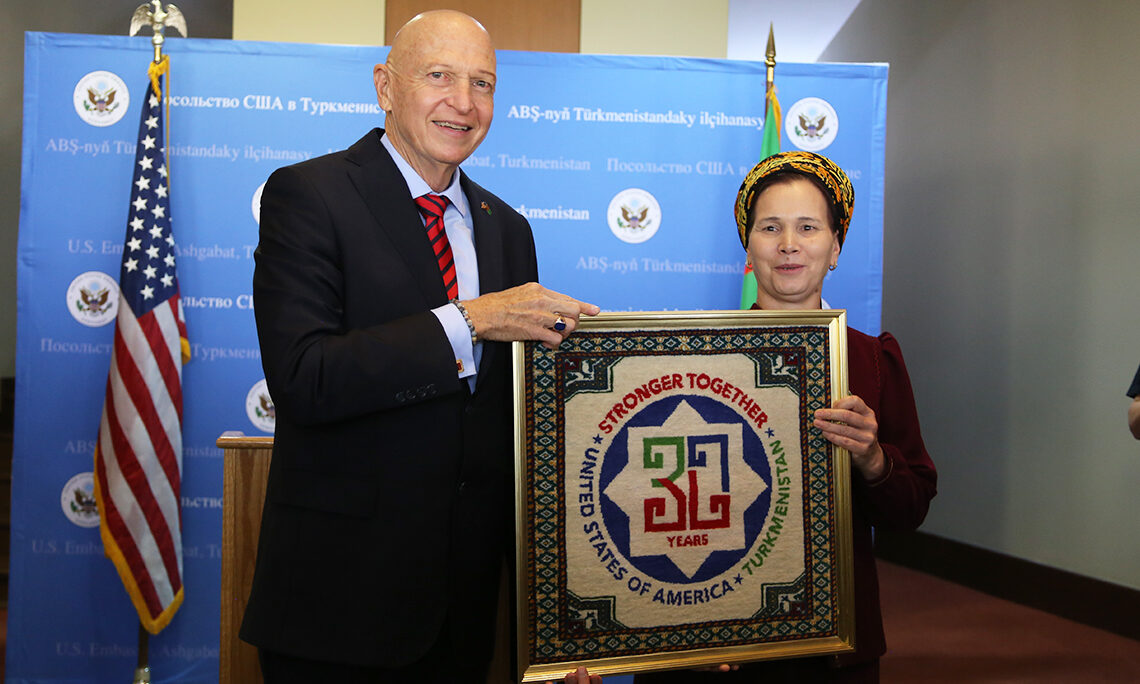 Ashgabat, July 7, 2022 – The U.S. Embassy in Ashgabat partnered with the State Library to host the first-ever Turkmen-American Book Festival at the State Library of Turkmenistan. The book festival is part of a series of events organized to celebrate the 30th anniversary of diplomatic relations between the United States and Turkmenistan. U.S. Ambassador Matthew Klimow and the Acting Director of the State Library Altyn Kakaeva spoke at the opening ceremony.

“Perhaps one of our most deep-rooted human instincts is the desire to preserve our culture for future generations. Libraries are our rich storehouses of history and culture, captured in books, literature, and poems—in the written word. The United States Embassy is proud to partner with the Government of Turkmenistan and the State Library to host this book fair,” said Ambassador Klimow in his remarks.

The audience enjoyed listening to English and Turkmen excerpts from the Embassy’s translations of classic American book titles such as “Harold and the Purple Pencil,” “The Little Engine That Could” and others. As part of an ongoing book program, the Embassy has translated 18 titles into Turkmen to date, including other classics like Mark Twain’s “The Adventures of Tom Sawyer” and “To Kill a Mockingbird” by Harper Lee.

Other items on display were several 19th century manuscripts that were preserved and restored with the support of the U.S. Embassy, in partnership with the State Library of Turkmenistan, through the U.S. Ambassadors Fund for Cultural Preservation (AFCP). Since its inception in 2001, AFCP has supported over 1,000 cultural preservation projects in more than 130 countries worldwide. 30 AFCP projects have been funded in Turkmenistan worth close to two million U.S. dollars making Turkmenistan the leading recipient in AFCP awards worldwide.

The American Spelling Contest was particularly well-received by festival-goers. The contestants, all English language enthusiasts, competed to determine who could spell the most words.

To commemorate 30 years of diplomatic relations, Ambassador Klimow presented the State Library with a hand-woven rug with a logo design inspired by traditional Turkmen patterns as well as the colors of the U.S. and Turkmen flags.

For more information please contact the Public Affairs Section of the U.S. Embassy in Turkmenistan by phone at 47-35-03 (ext. 1) or by email at USEmbassy-Ashgabat-PAS@state.gov.