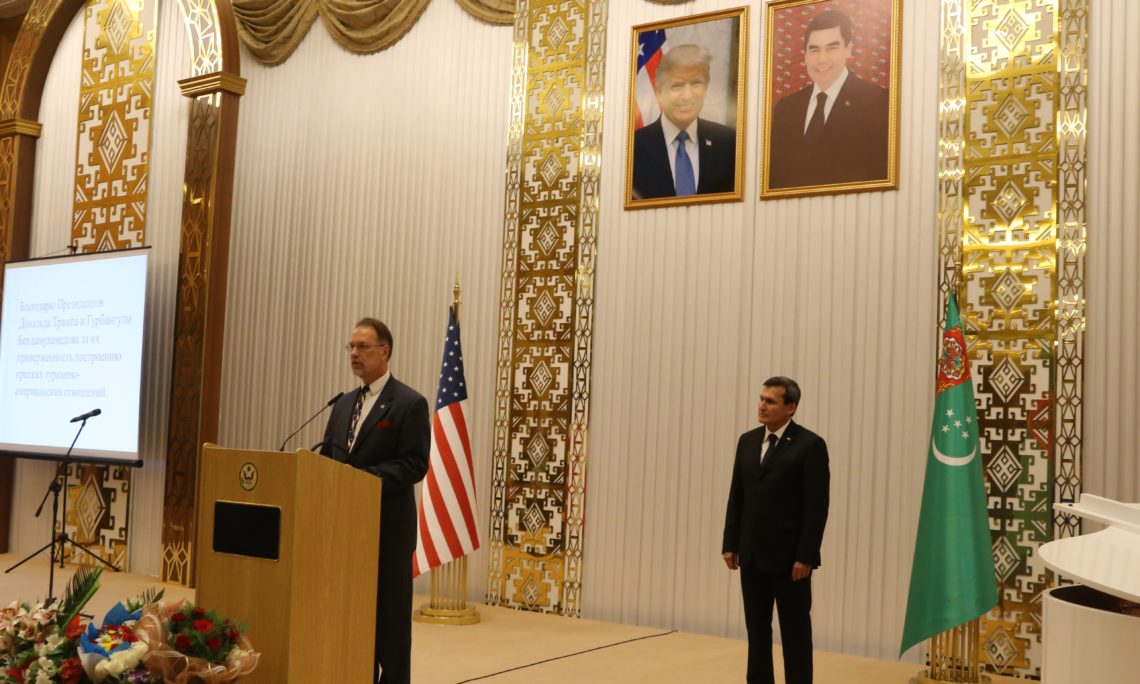 Dear Deputy Chairman of the Cabinet of Ministers, Minister of Foreign Affairs Rashid Meredov, fellow ambassadors, esteemed guests, ladies and gentlemen, good evening. Thank you for joining us as we commemorate our 242nd Independence Day. Thank you to Presidents Donald Trump and Gurbanguly Berdimuhamedov for their commitment to a strong U.S.-Turkmen relationship. And thank you to our sponsors— John Deere, Caterpillar, MMI Business Services, GE, and Case New Holland—for helping us create this celebration.

In 1776, when America’s founders signed the Declaration of Independence, it took over a month for the news to reach England, crossing the Atlantic by ship. From there, it took another three weeks for the news to spread across the merchant cities of Europe and Eurasia by horse, carriage, and riverboat. Finally, three months later, a camel caravan, traveling at 20-30 miles per day, might have carried the message inland across the Karakum desert to Mary, Khiva, and Bukhara.

The global Silk Road already existed then, though it took three months for word of a new democracy, founded in the belief of inalienable rights and rule of law, to reach what is now Turkmenistan.

No longer. Today, the Silk Road is both worldwide and digital. Information no longer walks at 20-30 miles per day. Thanks to one of these—a cellphone—we are live-streaming this speech to viewers around the world, instantly.

Many of you know the history better than I, but let’s look at how we got here:

(1) The Silk Road began over 2,000 years ago as a trail linking Xian in China with the West, for trade in silk, spices, and gold. Central Asia was the midpoint—the heart of the Silk Road.

(2) Over the next thousand years, the Silk Road became the Silk Roads—branching to multiple destinations in Eurasia and Africa, including sea routes.

(3) By the late 1400s, the search for a shorter Silk Road led to the discovery of the New World. The people, economies, and ideas of North America and Central Asia begin to connect.

(5) In 1903 the Wright brothers inaugurate the aviation age at Kitty Hawk, North Carolina. Soon air routes link Asia and the Americas, Europe and Africa. Silks from China are as likely to be transported by air as by truck, rail, or ship.

(7) Finally, there is really no New Silk Road—it is the original Silk Road, evolved, updated, modernized. I prefer to call it the Contemporary Silk Road. We might even say optical fiber is the new silk, and information its currency.

The Silk Road is not the story of one nation. It is the story of how mobility, entrepreneurship, and ideas changed the world. Oxford University Professor Peter Frankopan, here with us today, has written in his book The Silk Roads: A New History of the World, “There was good reason why the cultures, cities and peoples who lived along the Silk Roads developed and advanced: as they traded and exchanged ideas, they learned and borrowed from each other, stimulating further advances in philosophy, the sciences, language and religion… This was a world that was connected, complex, and hungry for exchange.” Today, the world is even more connected and even more complex. So we must remain just as hungry for exchange.

The Silk Road, when it prospered, had few traffic stops. Merchants and travelers “come and go without interference,” wrote one observer in 12th century Jerusalem. Caravans passed for thousands of miles without crossing a border, and caravanserais gave refuge to Afghan horse traders, Egyptian scholars, and Chinese monks alike. This freedom of movement, celebrated in Turkmen art and in the art of the American west, fueled the engine of trade.

In April, one of our public diplomacy officers embarked on a 1,300-kilometer bike trip from Farap to Awaza, cycling the length of Turkmenistan in 13 days. Along the way he encountered French, Turkish, and Chinese travelers—just as he would have a thousand years ago. In the process, he made contact with students and businesses that will benefit U.S.-Turkmen cooperation into the future.

At the same time, the Silk Road was not a government venture. The impetus was nothing more than supply and demand. The reason you could find Indian spices in an ancient Roman kitchen was as simple as the fact that people wanted them and were willing to trade. It is the same reason you can find Turkmen urea on American farms, and GE turbines on Boeing planes operated by Turkmenistan Airlines.

There was a role for the state: Enforcing contracts, providing security, building infrastructure. Rulers who built roads for the benefit of all, stood to benefit themselves. States that provided rule of law benefited from transparent customs and taxes. In this way, as Dr. Frankopan writes, “Villages turned into towns and towns turned into cities as business flourished and communication and commercial networks extended and became ever more connected.”

Which brings me to my final point: the Silk Road fostered and benefited from the exchange of ideas as much as the exchange of goods. With the advent and spread of papermaking, merchants advertised new markets, doctors recorded successful treatments, and scholars refined points of philosophy.

Written on paper was the promise of open information, which is now realized in the Internet. Last year, I came across two Russian-language biographies of Turkmen composer Nury Halmammedov. I was disappointed to see little information about him in English online, so I summarized the information on Wikipedia, where you can see it today, and where 1,000 readers worldwide have viewed it in the last year. Likewise, if you go to OpenStreetMap.org you will see the Internet’s most detailed and up-to-date map of Turkmenistan, created entirely by users like you and me, and used by tourists and entrepreneurs to explore the Great Silk Road, locate businesses, and exchange new ideas.

Tonight, as you make new acquaintances and greet old ones, I invite you discuss the role of America, Turkmenistan, and your country in the global Silk Road, and how we can use new modes of transportation and communications for the greater good. Please also take a moment to view the extraordinary works of American photographer Tom Till, another traveler along the Silk Road. He has captured some of Turkmenistan’s most recognizable and beautiful locations, some of which we proudly support through the Ambassadors Fund for Cultural Preservation.

I also invite you to sample American cuisine from across the country, representing different cultures and traditions. My wife, Ann, and our chef, Aylara, have collaborated with the hotel to provide a menu spanning America’s many regions.

Once again, thank you for joining us to celebrate our national day. On behalf of President Trump and the people of the United States of America, I wish you a very happy Independence Day, and prosperity as we, together, travel the Silk Road in Central Asia and beyond, and into the future.