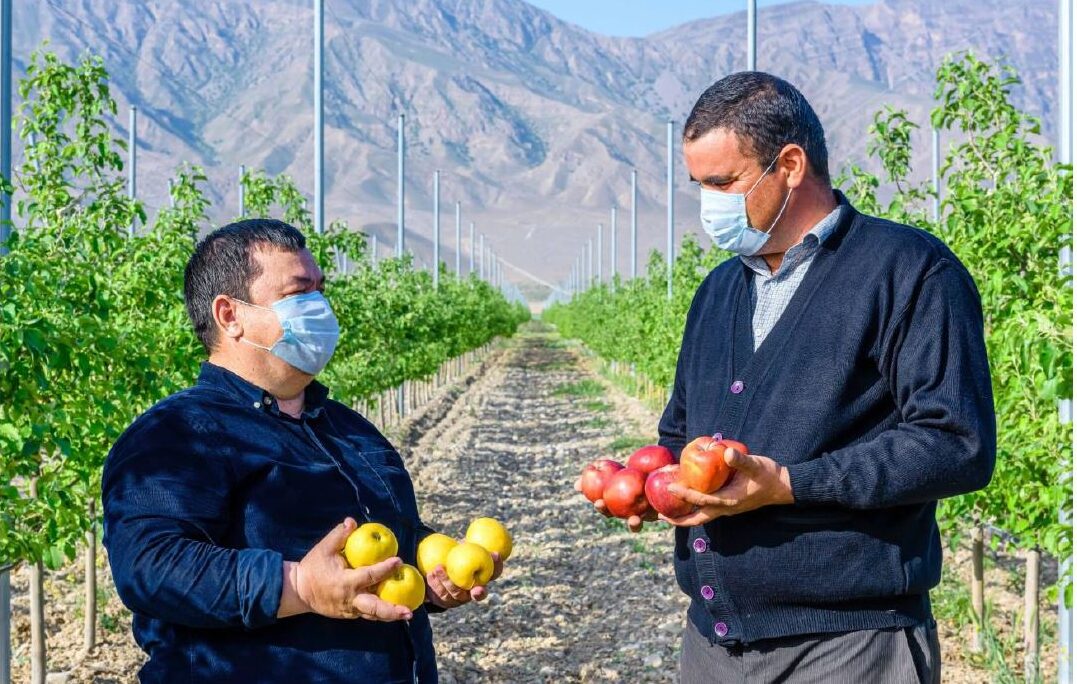 Ahal province in central Turkmenistan, is home to the capital city of Ashgabat. The south-center of the country, bordering Iran and Afghanistan along the Kopetdag mountains, produces one-fifth of the country’s agricultural production.

Meselli Meselliyev, an experienced orchard keeper, has been working for orchards in Ahal province, cultivating 100 hectares of apples, one of the most important fruits in the food basket of Turkmenstani consumers. Employing intensive production techniques, 60 hectares of it is host to a relatively young planting featuring dwarf rootstock of well-known apple varieties such as Golden Delicious, Gala, Red Chief, Scarlet Spur, Super Chief, Fuji, Granny Smith, Pink Lady, Starkrimson Delicious, Braebum, and others.

USAID’s partner in Turkmenistan, the Union of Industrialists and Entrepreneurs, chose this orchard to serve as a demonstration site and functions as a field school for broader rural community engagement at which the USAID Competitiveness, Trade, and Jobs activity arranged a series of practical trainings, and later provided targeted consultative assistance.

The most popular and traditional apple cultivation in Turkmenistan is orchards that mainly grow tall apple trees with wide spacing. An overwhelming majority of orchard keepers were unfamiliar with intensive practices which require new techniques, greater attention to detail, and more initial investment. However, if implemented properly, the intensive approach had the potential to double yields and returns in about 5-6 years.

Since 2016, the USAID Competitiveness, Trade, and Jobs activity in Turkmenistan has focused on developing the country’s horticultural sector, and along with others, in the fall of 2019, it began to change the status quo in Turkmen apple orchards. Initially, USAID provided a series of theoretical training followed by in-person assistance periodically visiting the demonstration orchard, but since March 2020 due to COVID-19 related precautions, assistance has switched to a virtual format.

“Thanks to USAID, I learned how to prune correctly, apply optimal fertilizers, irrigate at the right time, and in the right quantities, and manage disease and pest infestations,” noted Meselli.

USAID’s comprehensive support enabled Meselli from the demo orchard in Ahal province to bring in a 2020 apple crop almost twice that of the previous year. The crop averaged 12-15 tons per hectare, which is around 25 percent higher than an average young apple orchard in Turkmenistan.

Most recently, in March 2021, another USAID endeavor aimed to promote horticultural best practices across Turkmenistan was co-hosted jointly with the United Nations Development Program. Through an online event, USAID brought together speakers in Ashgabat with apple growers from two remote provinces. Over 50 participants including rural farmers of Lebap and Dashoguz provinces, local authorities, members of Union of Industrialists and Entrepreneurs, and faculty of the State Agricultural University in Dashoguz learned international best
practices on how to protect apple orchards from pests, weeds, and diseases.

Over 100 farmers across Turkmenistan are now equipped with consistent and systematic agrotechnical measures which enable higher apple yields. Several of Turkmenistan’s apple orchards are poised to double their yields in the years to come.

About this story
USAID’s Competitiveness, Trade, and Jobs activity facilitates trade and employment in horticulture, tourism, transport, and logistics across the five Central Asian economies. By incentivizing firms to become more regionally competitive and by addressing cross-border impediments to trade, USAID helps to develop a more diverse and competitive private sector and generate export-driven growth.