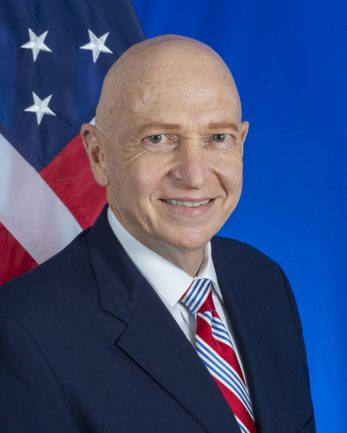 Ambassador Matthew S. Klimow was sworn in as United States Ambassador to Turkmenistan on May 30, 2019. He has held leadership positions at the White House, the State Department, the North Atlantic Treaty Organization (NATO), and as an officer in the United States Army. He most recently served as the Acting Inspector General for the Department of State.

From 2012 to 2015, Ambassador Klimow served as a Deputy Assistant Secretary General of NATO in Brussels, Belgium. He was responsible for management reform and operational planning for the new NATO Headquarters. Other diplomatic assignments include Executive Director for the Bureaus of Administration and Information Resource Management (2010-2012), Director of Language Services (2008-2010), and Executive Director for the Bureau of Consular Affairs (2003-2008).

Ambassador Klimow served on the White House staff as Special Advisor to the Vice President of the United States (2002 to 2003) and as military advisor to the Secretary of State (1995-1998). He has participated in six Presidential summits, served on an interagency arms control team that negotiated the START III Treaty framework, and contributed to the writing of the NATO-Russia Charter.

As a soldier, Ambassador Klimow commanded infantry troops from platoon to brigade, to include the 2,000 paratroopers of the 18th Airborne Corps Combat Support Brigade at Fort Bragg, North Carolina (1998-2000). He was awarded the Silver Star, the nation’s third highest award for valor in combat. He also served as the Executive Assistant to the Chairman of the Joint Chiefs of Staff (2000- 2002). During the terrorist attacks on September 11, 2001, he was in the Pentagon and remained in the National Military Command Center with the Chairman of the Joint Chiefs and the Secretary of Defense, coordinating the nation’s military response.

Ambassador Klimow is a native of Johnson City, New York, and a graduate of the United States Military Academy at West Point. He is a published author and holds a Master of Art Degree in Public Administration as well as a Master of Military Art and Science Degree. He was Visiting Defense Fellow at the Center for International Relations at Queens University in Canada. Ambassador Klimow is married to Major (ret) Edie Gunnels. They have a son and two grandchildren.