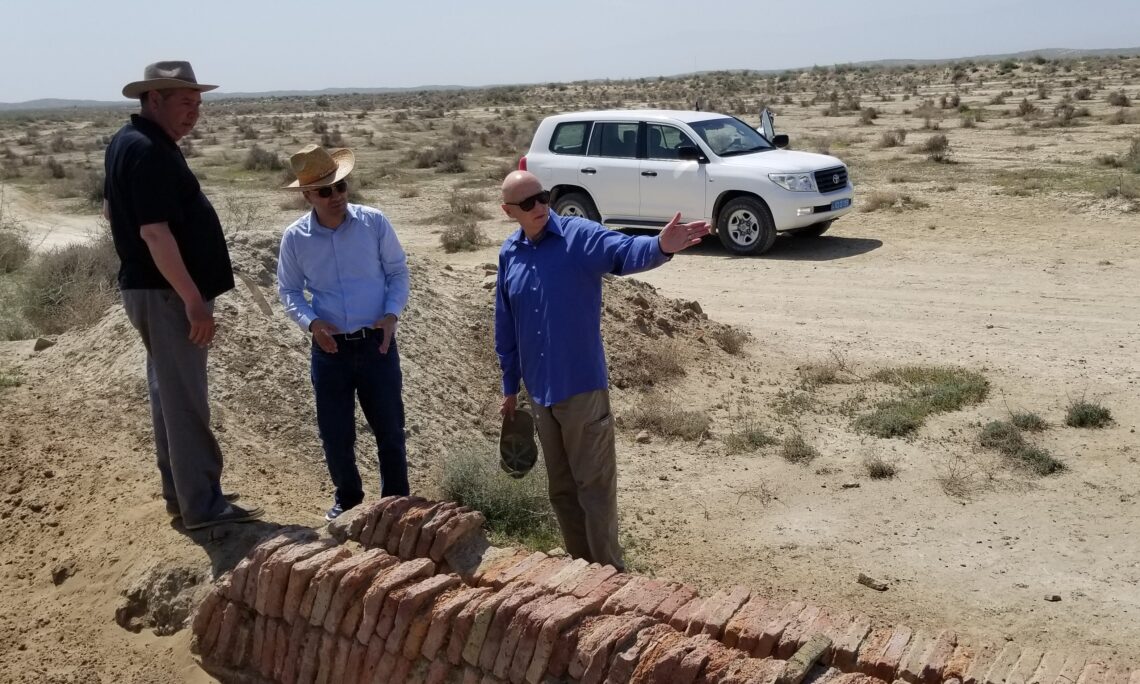 Ashgabat, August 27, 2020 – On August 27th the U.S. Ambassador to Turkmenistan, Matthew S. Klimow, announced an award from the United States’ Ambassadors Fund for Cultural Preservation (AFCP) to the Union of Industrialists and Entrepreneurs of Turkmenistan and the Institute of History and Archaeology of the Academy of Sciences of Turkmenistan for their collaborative project to preserve underground reservoirs at the Shahrislam historical site. The award was announced at a virtual ceremony organized by the U.S. Embassy in Ashgabat. With this latest AFCP award, Turkmenistan now has more AFCP projects than any country, making it a global leader in partnering with the U.S. to preserve cultural heritage.

Shahrislam was an ancient city in the Garagum desert 20 kilometers north of the town of Baharden. The city existed from the 9th century through the beginning of the 15th. It was a regional center and an important stop along the Great Silk Road. The project announced today will restore two underground water reservoirs (called sardobas) at the site.

The U.S. Ambassador to Turkmenistan, Matthew S. Klimow, reflected on his visit to the site of the preservation work: “When I visited Shahrislam, I was amazed to see the excavation and research work accomplished by Turkmen experts at the site.” He added,“the United States’ funding to preserve the reservoirs there is the latest example of the U.S. government’s long-term partnership with the government, businesses, and local experts of Turkmenistan as they advance their country’s tourism sector by preserving heritage that is a treasure for the entire world.”

When considering which projects to fund, the United States’ Department of State compares the merits of projects from around the globe. Therefore, the fact that the AFCP committee chose to partner with Turkmenistan on this project proves the project’s rich cultural value not only for the people of Turkmenistan, but for all of humanity.

In addition to the innovation represented by the project, the uniqueness of the underground reservoirs at Shahrislam offer great tourism potential. The sardobas were fed by a system of tunnels (called kariz) that is unique in Central Asia. The tunnels carried water from more than 20 km away from springs located in the Kopetdag Mountains. Additionally, the reservoirs at Shahrislam include the only example in Central Asia of a rectangular-shaped sardoba. With the AFCP project announced today, the United States’ again shows its commitment to partner with the people and the government of Turkmenistan as they work to preserve the unique cultural riches of the country and advance the country’s tourism sector.

The U.S.-supported project announced at today’s ceremony will complete specific works to restore the sardobas and protect them from future damage. Experts will remove accumulated sand; restore the portals of the sardobas; restore and reinforce the walls, the stairs leading into the reservoirs, and the dome and arched ceilings above the sardobas. Finally, a fence will be built around the sardobas to prevent damage from rain runoff and from animals. With these works, the sardobas will be preserved for the benefit of generations to come.

For all media inquiries, please contact the Public Affairs Section of the U.S. Embassy in Turkmenistan at USEmbassy-Ashgabat-PAS@state.gov.