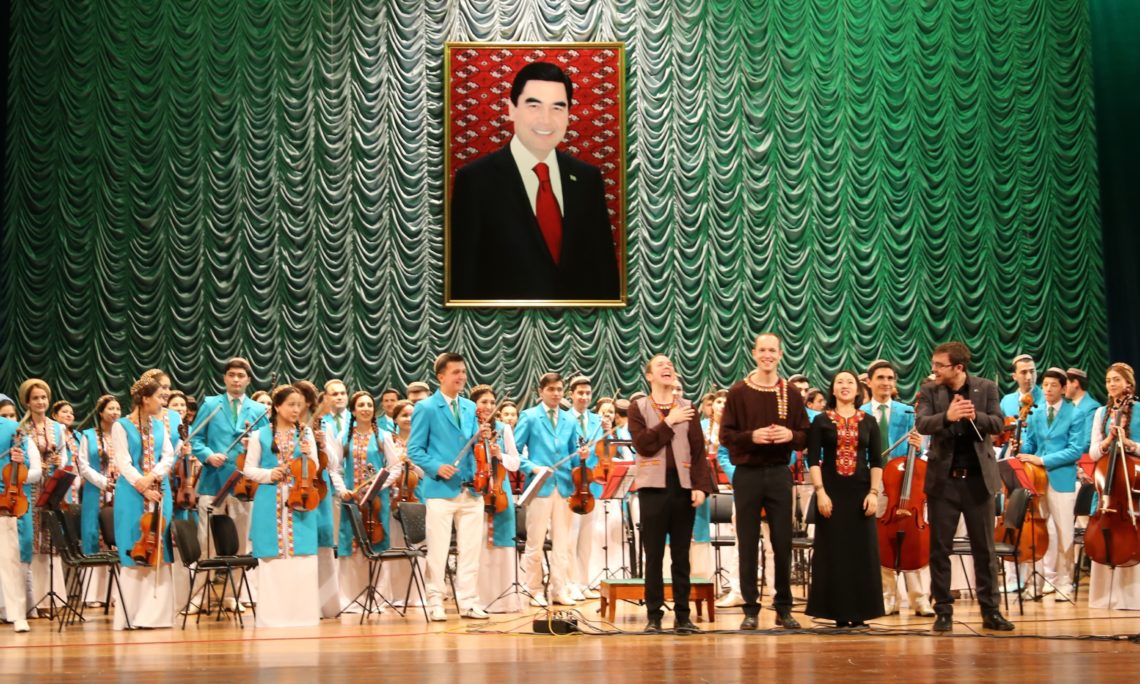 Ashgabat, December 22, 2017 – The U.S. Embassy is sponsoring a fourth and final trip by four musicians from the United States to work with the Turkmen National Conservatory, culminating in a joint concert on Saturday, December 23, at 6:30 p.m. at the Magtymguly National Music and Drama Theatre. The concert will feature American classics, holiday music, and Turkmen orchestral pieces. Concert admission is free and open to everyone.

As part of the event, the U.S. Embassy will provide several musical instruments—including timpani drums, a drum set, and electric guitars—to the Conservatory, as a symbol of U.S.-Turkmen cooperation.

This represents the fourth and final stage of a two-year project between the Conservatory and the non-profit organization American Voices, and builds on several prior visits by its director, John Ferguson.

Derek Beckvold is a multi-instrumentalist and composer who works at the Boston Philharmonic has performed in Africa, Asia, Europe, the Middle East, and North America. He has has taught extensively throughout Boston, as well as at the Afghanistan National Institute of Music (Kabul, Afghanistan), the Music Matters School (Colombo, Sri Lanka) and the Global Music Institute (New Delhi, India). Derek recently completed a nine-month Fulbright-Nehru grant in New Delhi.

Kim Mai Nguyen, a Juilliard-trained violist, joined the Oregon Symphony for the 2016-2017 season and
was a member of the Oregon Bach Festival for the 2016 summer series. In 2010, Kim Mai performed for Michelle Obama and the spouses of the heads of government attending the United Nations General Assembly. She has performed as a soloist and taught in Afghanistan, Belize, France, Guatemala, Iraq, Jamaica, Prague, Vietnam, and the United States.

Peter Thoresen is a performer, voice teacher, and music director who teaches at Pace University and his own studio. He has credits from the Lyric Opera of Chicago, Dell’Arte Opera Ensemble, and the American Opera Theater. His students regularly appear in productions on and off Broadway and in national tours. He previously served as a visiting faculty member at Indiana University, where he earned a doctor of music degree.

Avery Waite, a Juilliard-trained cellist, has appeared in concert at Alice Tully Hall, Avery Fisher Hall, Carnegie Hall, The Kennedy Center, and MoMA, and has performed solo in Asia, Europe, and North America. He is Development Director of MusAid, a non-profit organization specializing in global music education and has taught in Belize, El Salvador, and Jamaica.

American Voices is a non-profit organization that has been conducting cross-cultural engagement with audiences in over 110 nations worldwide since 1993. The organization has showcased American jazz, classical, and hip-hop around the world, and has partnered with the U.S. Embassy to bring American musicians to Turkmenistan.

For more information about this program, please contact the Public Affairs Section of the U.S. Embassy in Ashgabat at 47-35-06 (1) or e-mail irc-ashgabat@state.gov.