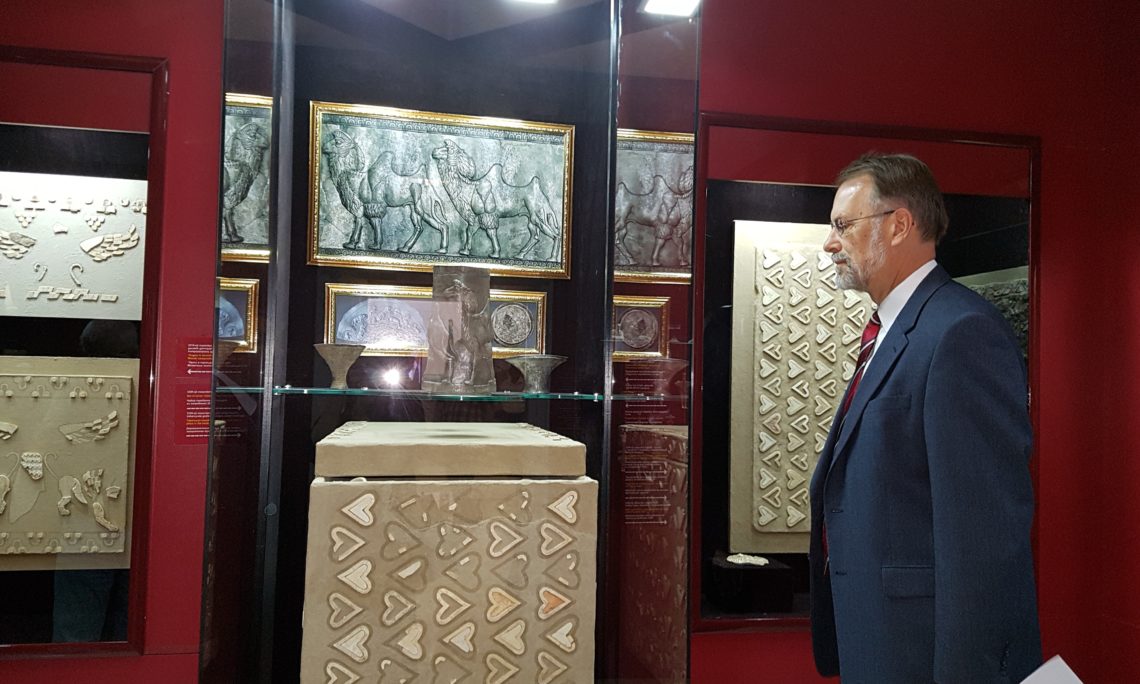 Ashgabat, August 16, 2017 –  On August 14, 2017, U.S. Ambassador Allan Mustard celebrated the completion of a joint project with the Museum of Fine Arts in Ashgabat to conserve, restore, and reconstruct ancient mosaic panels from Turkmenistan’s archaeological site at Gonur Depe. In 2015 the U.S. Embassy in Ashgabat awarded a grant to the Museum of Fine Arts to help preserve the site, which is internationally-known and dates from 2300 B.C. Ambassador Mustard also joined the museum staff in opening a permanent exhibition dedicated to the mosaic works and their restoration.

The U.S. Embassy in Ashgabat is proud to have worked with the Government of Turkmenistan and other partners to conduct 24 cultural and historical preservation projects worth more than $1.5 million across the country, under the auspices of the Ambassadors Fund for Cultural Preservation, or AFCP. Through this program, the U.S. Embassy has helped preserve ancient Silk Road sites, centuries-old crafts and carpets, folk music, and Turkmen manuscripts. These projects demonstrate the U.S. Embassy’s respect for Turkmen culture and highlight possibilities for cooperation between the countries.

As Ambassador Mustard said at the event, “Turkmenistan has received more of these grants than any other country in the world,” and “historical preservation and conservation are shining examples of what the bilateral relationship between Turkmenistan and the United States can achieve.”

The mosaic collections were discovered during archaeological expeditions of Margiana, the capital of ancient Gonur Depe, in 2004 and 2009. The Russian Scientific Restoration Institute assisted the Museum of Fine Arts in the conservation, restoration, and cataloguing of the mosaics.

For more information, please contact the Public Affairs Section of the U.S. Embassy in Ashgabat at 47-35-03 (ext. 1) or e-mail irc-ashgabat@state.gov.