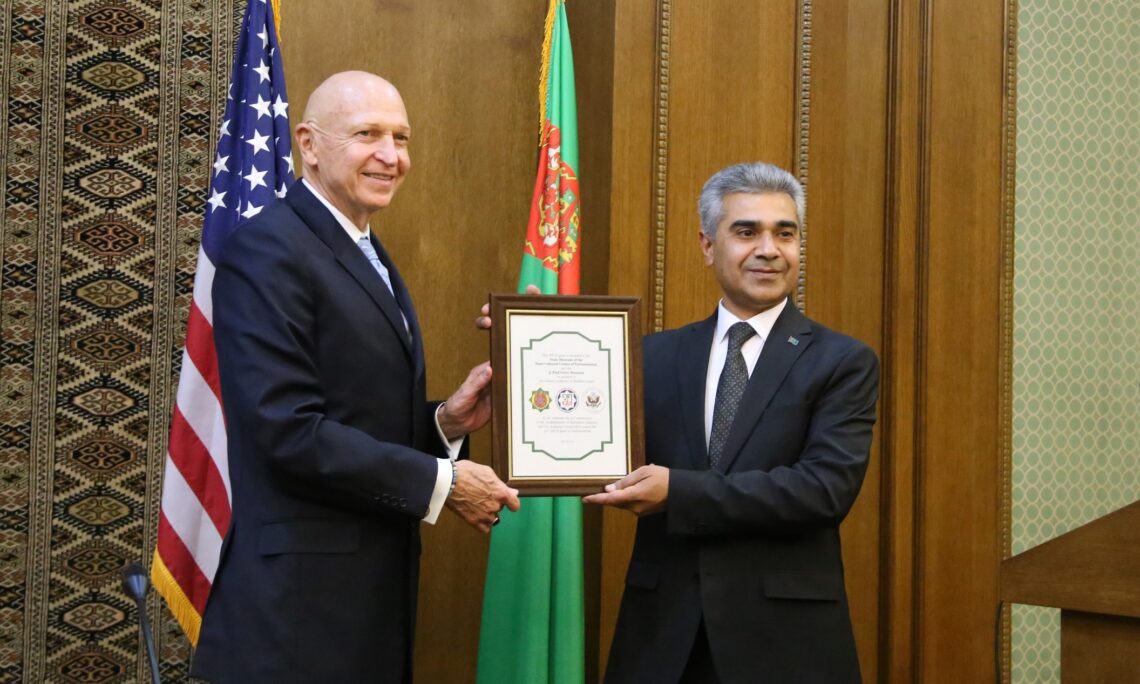 Ashgabat, July 8, 2022 – Today, U.S. Ambassador to Turkmenistan Matthew S. Klimow and Ministry of Culture of Turkmenistan representatives announced the recipient of a new grant from the U.S. Ambassadors Fund for Cultural Preservation (AFCP) program during a ceremony, held in a virtual format. The 30th AFCP project in Turkmenistan was awarded to the joint proposal between the J. Paul Getty Museum in Los Angeles and the State Museum of the State Cultural Center of Turkmenistan aimed at preserving the 5th century Buddha Head found in the ancient city of Merv. Ms. Susanne Gänsicke, Head of the Antiquities Conservation, J. Paul Getty Museum, Mr. Fabio Colombo, Conservator in private practice from Rome, Italy, and Mr. Meretgeldy Charyev, Director of the State Museum of Turkmenistan attended the virtual ceremony to receive the grant.

“The grant for the conservation of the Buddha Head is the 30th Ambassadors Fund for Cultural Preservation program project in Turkmenistan. We are delighted that this coincides with the ongoing celebration of the 30th anniversary of establishment of diplomatic relations between the United States and Turkmenistan. I am proud to say that Turkmenistan has the highest number of AFCP projects around the world, a sign of deep respect that the United States has for Turkmenistan’s Silk Road heritage.” Ambassador Klimow noted in his opening remarks.

The State Museum of the State Cultural Center of Turkmenistan, the J. Paul Getty Museum, Los Angeles, and the other team members will collaborate to study, stabilize and preserve the remains of the 5th century Buddha Head discovered in Merv. As it was highlighted by Ambassador Klimow: “A metropolis along the Great Silk Road, Merv was a wealthy urban city where Zoroastrianism, Christianity, Judaism, and Buddhism co-existed peacefully. This project will provide unique insights into the less explored Buddhist heritage of Turkmenistan.”

The U.S. Ambassadors Fund for Cultural Preservation is an annual grant competition established and administered by the U.S. Department of State. Since its inception in 2001, AFCP has supported over 1,000 cultural preservation projects in more than 130 countries worldwide. To date, the AFCP has funded 30 projects in Turkmenistan worth close to two million U.S. dollars, which makes Turkmenistan the leading recipient in AFCP awards worldwide. Through this collaboration, the U.S. Embassy has worked closely with the Government of Turkmenistan to support the preservation and research of historically important cultural sites along the Great Silk Road, centuries-old crafts and carpets, folk music, and historic manuscripts.

For all media inquiries, please contact the Public Affairs Section of the U.S. Embassy in Turkmenistan at USEmbassy-Ashgabat-PAS@state.gov.