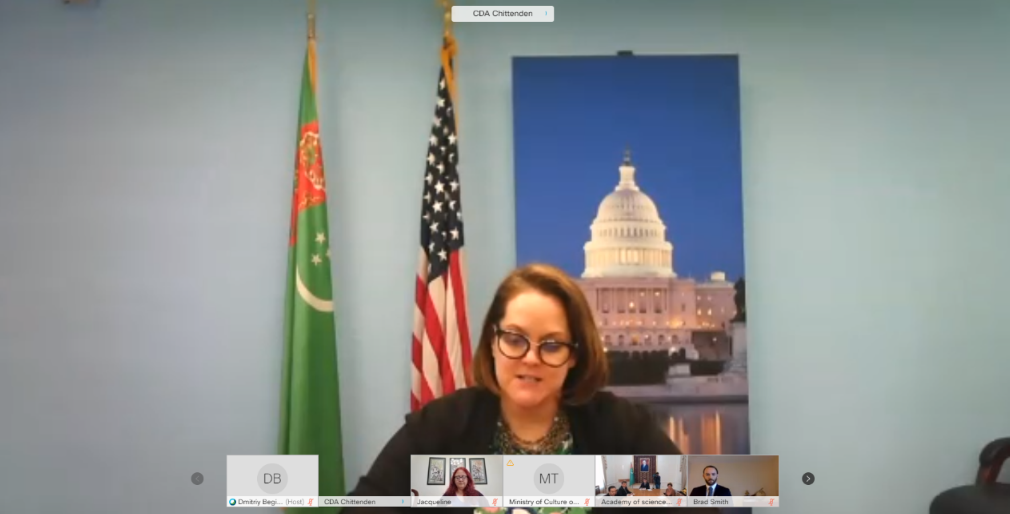 Ashgabat, November 6, 2020 – On November 5 the Chargé d’Affaires, a.i. of the U.S. Embassy in Turkmenistan, Ms. Valerie Chittenden, announced the U.S. Government’s support of a cultural preservation project to protect historical manuscripts in Turkmenistan. During a virtual ceremony hosted by the U.S. Embassy in Turkmenistan, Chargé d’Affaires, a.i. (CDA) Chittenden granted the 28th U.S. Ambassadors Fund for Cultural Preservation (AFCP) project in Turkmenistan to the Magtymguly Institute of Language, Literature, and National Manuscripts under the Academy of Sciences of Turkmenistan, and the U.S. organization Merrion and Smith. Mr. Dawut Orazsahedov, the Director of the Institute, and Bradford Smith, Director of Programming with Merrion and Smith, attended the virtual ceremony to receive the grant. The U.S. and Turkmen organizations collaborated on a joint proposal to supply experts in Turkmenistan with cutting-edge technology to preserve important manuscripts from the 17th, 18th, and 19th centuries.

“This is the first AFCP project in Turkmenistan that is being awarded to a joint proposal from a Turkmen and American organization,” CDA Chittenden said, adding, “It is appropriate that a project to preserve important books opens a new chapter in the collaboration between experts from the United States and Turkmenistan.” Merrion and Smith is a private, U.S. organization that specializes in cultural preservation and museum curation. They will collaborate with the Institute to provide Turkmen experts with leading technologies in the field of manuscript preservation.

The project will support the Institute’s preservation of 80 manuscripts, in Arabic, Persian, and Turkic languages, from famous scholars, poets, and authors who lived in Central Asia and the Middle East. Most of the books and manuscripts are very rare with only a few original copies remaining around the world. The United States is proud to partner with Turkmen experts to preserve these cultural treasures, which are not only an important part of Turkmenistan’s heritage, but that of Central Asia and humanity as a whole. The United States’ is contributing $43,470 to this important work.

Through this AFCP project, Merrion and Smith will collaborate with the Institute to complete the following preservation work on the books: de-acidification of pages, restoration of lost parts of the books, reinforcement of the manuscripts’ bindings, and the pagination of the books, among other restoration tasks. Additionally, the Institute plans to develop a computer network to create an e-library online catalogue of the works.

This project demonstrates the United States’ long-term commitment to partner with Turkmen experts in the preservation of cultural heritage that is a benefit for all of mankind. The collaboration with Merrion and Smith to develop technological expertise to preserve old texts is part of an ongoing exchange between the Institute and American experts. In February and early March of 2020 two experts from the Institute visited prestigious institutions in the United States, including Yale University, the Metropolitan Museum of Art in New York City, and the Library of Congress in Washington, DC. During the trip they developed partnerships with American colleagues and collected copies of Turkic, Persian, and Arabic texts related to Turkmen history. Furthermore, Merrion and Smith will coordinate the visit of American manuscript preservation experts to visit Turkmenistan in the near future. The United States previously supported Turkmen work to preserve important historical manuscripts with an AFCP grant to the Institute of Manuscripts in 2006.

About the growing, long-term collaboration between experts of the United States and Turkmenistan, CDA Chittenden noted, “By working together to preserve Turkmenistan’s past, we’re building partnerships for Turkmenistan’s future.”

The AFCP is a flagship program of the U.S. Embassy in Ashgabat. The United States has supported 28 cultural preservation projects in Turkmenistan through the AFCP since 2001. This project for manuscript preservation is a reminder that in addition to helping to preserve physical sites such as Gyz Gala in the Mary province, the Dayahatyn Caravanserai in Lebap province, or the sardobas at Shahrislam in Ahal province, the AFCP program supports preservation of many aspects of Turkmenistan’s culture. Past projects have included preservation of antique Turkmen carpet bags and recordings of early folk music at the archives of the National Conservatory of Turkmenistan.

For more information, please contact the Public Affairs Section of the U.S. Embassy in Turkmenistan at usembassy-ashgabat-pas@state.gov.